In the weekend of November 19 we, Stefan and Mischa Lemaire, were present during the opening of the exhibition Young Interventions 20-22 in the Memorial Sachsenhausen. We are part of the group, “Voices of the Next Generations”. November 19 is a special day for us for a completely different reason: On this day 116 years ago our Grandfather Jan Lemaire Jr. was born in Amsterdam.

The exhibition features several short films made by members of the Voices of the Next Generations during our visit in 2021. In our short film we read from Jan’s book about his years in the camp, “Men in Zebra”. Because of his birthday, we spoke at the opening alternately in Dutch and English.

Today is November 19th, a special day for us.
Our grandfather Jan was born 116 years ago on this day in Amsterdam.

Jan was a well-known actor, playwriter and recital artist in the Netherlands. He liked to paint and was politically very active as a communist before the war, (during the war he was active in the resistance.)
He was arrested on suspicion of working for an illegal newspaper.

On October 6, 1941, just before his 34th birthday, he was arrested, and he would celebrate his next 4 birthdays in captivity. Three of which here in Sachsenhausen.

About one of his birthdays in Sachsenhausen there is a wonderful anecdote told by another former prisoner, after the war, he said:
“I can’t remember much about Sachsenhausen except that there were three Russians with a guitar singing “aja jippie jippe jee”…. because it was Jan Lemaire Jr’s birthday…”

After the war he had no more room for communism and politics, and he focused entirely on theater and his family.
People who knew him after war called him a humanist.

15 more birthdays would follow in often difficult freedom, often with bad dreams and screaming in the night, his sons, our fathers, told us.
Jan died at the age of 53, according to older family members, partly due to the consequences of his imprisonment here.

Jan wrote here in Sachsenhausen during his work, and inside Barack 52 two manuscripts:
His diary, Men in Zebra, about his life in captivity, was the book that eventually brought us to Sachsenhausen with his great-grandchildren.

And he wrote another manuscript, unknown to us until recently.
A manuscript about his love for poetry and the Dutch language that he used for his recitals at the Dutch evenings here in Sachsenhausen.

Jan wrote in his introduction to the manuscript, ‘Blooming Roses Poetry’:
“It is not easy to pick Dutch roses in a concentration camp. And then to arrange them into a ‘fine scent’.
Nor does my memory function well here, so this well is not flowing freely either.
Driven by an inner urge for beauty.
Beauty is a concept that means very little here and what I and so many with me need.
My great love for our beautiful Dutch language has also driven me.
Living here in an ever-hostile world, far from the dear low country by the sea, one feels deeply what it means to possess one’s own language, one’s own poetry.”

And this is why we also address you in Dutch here today, not out of rebellion, but as a tribute to him.
Here in Tower A, the gateway to the place he so hated, by speaking his beloved Dutch language on the day of his birth.
Think of speaking Dutch as a somewhat delated birthday present from us, his grandchildren.
Dutch in this place in the present, surrounded by art, beauty, made from the heart.
We think it would do him good, he was a man of the fine arts.

In our film you can see that he wondered if we wouldn’t forget a lot.
No, hardly any of us have forgotten.

That evening we had a special meeting with Ellen Brombacher, the daughter of Ernst Harter, a very good friend of Jan Lemaire Jr. in Sachsenhausen and after whom Jan would name his third son after the war. Ellen wrote a penetrating book about her family, “Deutsch-Jüdisches Familienbild”, in which she also pays attention to the friendship between her father and Jan Lemaire Jr. 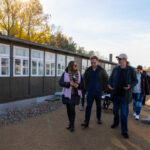 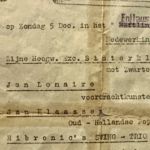